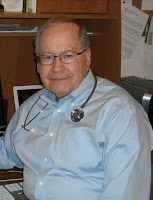 Welcome to the CBRB! Thank you for being here, Richard! Can you tell us a little bit about yourself?

I’m a physician, retired after 36 years in practice, the last ten as a professor at a prestigious medical school. I’m a husband, father, grandfather, frustrated golfer, avid reader, fortunate member of Stonebriar Community Church (where I get to hear Chuck Swindoll every Sunday)…Oh, yes. I also write.

When did you first discover that you loved writing?

About the time I was ready to retire from my position at the medical school, my first wife died. I used journaling as a coping tool, and later turned excerpts from that writing into a book, The Tender Scar: Life After The Death Of A Spouse. While I was trying to learn the craft, several authors encouraged me to try my hand at fiction. I did, and found it to be a challenge I couldn’t ignore.

Why do you write the type of books that you do?

Yes, I know I enjoyed that glimpse into the world of medicine! What was your greatest obstacle in writing and how did you overcome it?

Like many writers, I find the blank page (or nowadays the blank computer screen) to be a huge challenge. I’m not sure I’ve overcome that even now, but I’ve found that when I’m stuck, unsure of where my characters want to take the story, it’s best to let what Stephen King calls “the boys in the basement” take over. I move away from the computer, let my subconscious mull things over, and usually the answer comes to me.

Has writing changed your life in any way?

Definitely. Alton Gansky told me when I first started writing that I’d never read a book the same way again…and he was right. Now I not only read for story but for craft. The other way writing has changed my life is to allow me the privilege of friendship with a wonderful group of Christian writers. Who could ask for anything more?

What Bible scripture has impacted your life the most?

After Cynthia’s death, I clung to Romans 8:38-39 like a drowning man to a piece of wreckage. Later, as I began to write, I found that Psalm 139 was especially meaningful to me, and I quote Psalm 139:1-5 when I sign books.

Is there a book you’ve read that has been truly spectacular?

Spectacular isn’t a word I tend to use about books, at least not novels, although I’ve read dozens of great ones. However, reading Fearless by Max Lucado had a profound influence on my life.

Probably playing the role of Ko-Ko, The Lord High Executioner, in a production of The Mikado, while I was in the Air Force. Frankly, I think I looked great in a kimono.

Ha! Ha! Please tell us about the featured book.

Lethal Remedy poses the question, “What if a wonder drug isn’t as wonderful as it seems?” Here’s an excerpt from the back cover copy:

Dr. Sara Miles’ patient is on the threshold of death from an overwhelming, highly resistant infection with Staphylococcus luciferus, known to doctors as “the killer.” Only an experimental antibiotic, developed and administered by Sara’s ex-husband, Dr. Jack Ingersoll, can save the girl's life.
Potentially lethal late effects from the “wonder drug” send Sara and her colleague, Dr. Rip Pearson, on a hunt for hidden critical data. Can they find the answer and reverse the changes before it’s too late?
Can you please give us the first page?

No one knew the man’s name. White male, probably in his late seventies, found unresponsive in an alley about two o’clock in the morning and brought to the emergency room. Just another homeless derelict, another John Doe.
“Pneumonia, late stages,” the intern said. He yawned. “Happens all the time. Drank himself into a stupor, vomited, aspirated. Probably been lying in that alley for more than a day. Doesn’t look like he’ll make it.”
“Labs cooking? Got a sputum culture going?”
“Yeah, but it’ll take a day or two to get the results of the culture. The smear looks like Staph. Guess I’ll give him—”
“Wait. I’ve got access to an experimental drug that might help. Let me start him on that.”
The intern shrugged. It was two in the morning. He’d been on duty for more than twenty-four hours straight—why’d Johnson’s wife have to go into labor today?—and he was bushed. The bum probably didn’t have a snowball’s chance of surviving anyway. Why not? “You’ll be responsible?”
“I’ll take it from here. Even do the paperwork.”
“Deal,” the intern said, and ambled off to see the next patient.
Three hours later, John Doe lay on a gurney in a corner of the ER. An IV ran into one arm, a blood pressure cuff encircled the other. Spittle dripped from his open mouth and dotted his unshaven chin. His eyes were open and staring.
“Acute anaphylaxis, death within minutes. Interesting.” He scratched his chin. “Guess I need to make some adjustments in the compound.” He picked up the almost-blank chart. “I’ll say I gave him ampicillin and sulbactam. That should cover it.”

MY REVIEW:
Lethal Remedy was an enjoyable, enlightening, and suspenseful read. You can tell from the first page that Mr.Mabry knows what he is talking about. There is a lot of medical terms in this book. So much, in fact, that at the beginning of the story I felt somewhat lost. However, after understanding the many medical terms, I was able to understand and enjoy the story better... and walk away with a whole new vocabulary of medical terms!

Like I mentioned before, this book was a suspenseful read. The stakes were raised high when medical complications (lethal side-effects) became apparent concerning the "wonder drug" Jandramycin. Add a pharmaceutical company that is attempting- at all costs- to keep these side-effects secret and you have one tension-ridden story. Throughout the book, I kept wondering, "how is Mr.Mabry going to fix these side-effect problems?" Well, only a doctor as experienced as him, which is apparent from the story, could solve this answer. I was pleased that it was a practical, easy-to-understand answer.

Slowly, I was able to warm up to the main characters. They were not as flat as they initially seemed. And I was surprised to find a touch of romance included in the story- although, I would have liked a bit more. Oh, and I can't forget that you-can't-trust-everyone feeling. It amped up the suspense even more!

The ending was rather abrupt. I felt left "in the dark" concerning who the real villain was (there were some suspenseful scenes with an anonymous person and I still don't know who that anonymous person is... not entirely). The romance was left hanging as well. All in all, this was a wonderful, enlightening, and suspenseful read! I give it 4 out of 5 stars... because of the incomplete ending. It can be bought at Amazon.

***********
GIVEAWAY!
Here's your chance to win a print copy of this wonderful book, Lethal Remedy! It's always fun to share a great book with someone who hasn't been able to read it yet, so I am giving away my gently used (signed) copy. Just leave an encouraging comment for Mr.Mabry below with your email address to be entered in this giveaway. Giveaway is open for the lower 48 states of the U.S. only.
For extra entries:
~Be a follower +1
~Add my button to your blog +1
~Post about this giveaway +2
(please leave a separate comment for each extra entry)
Giveaway ends Sunday April 1, 2012 at midnight (Eastern time). Whoever wins doesn't have to worry about me pulling a prank on them [for April Fool's day]:-)
Posted by Aizess